In 1966, when the Università Pro Deo was founded, the Library held about 20.000 volumes, gifts from friends of the University. 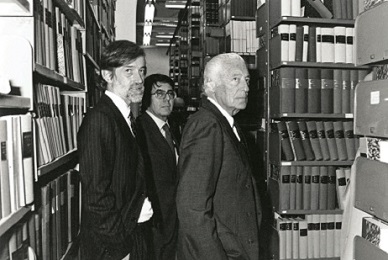 In 1977, when Luiss Libera Università Internazionale degli Studi Sociali was founded, the Library's collections were curated according to the needs of the Departments of Economics and Political Science, and, starting in 1982, the newly founded Department of Law. The Library's offices were located on the ground floor of Villa Alberoni, the University's historic campus, while the stacks and reading room were located in the basement. Under the guidance of Guido Carli, the University invested in an electronic database using software and hardware from IBM. The avantgarde automation project regarded teaching, student services, accounting and library resources, leading to the creation of Stairs, a cataloging software for bibliographic material. 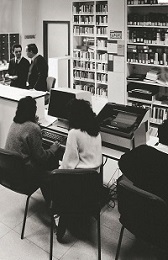 In 1988, the Library was moved to its current location due to the growth of the Library's collection to 45,000 texts and the expansion of its services. On Via di Santa Costanza, the Library is now located next to one of Rome's most important ancient monuments, the Mausoleum of Santa Costanza, built in memory of Emperor Constantine's daughter.

In 2000, the Library adopted the ILS Amicus, introducing the use of international standards to catalog the collection of 75,000 monographs and 1,200 periodicals.

In 2018, following two years of intense renovations, the purchase of the entire ground floor of Cecilia Serlupi and a second external pavilion, the Library offers its users modern spaces, inspired by contemporary design, and highly technological services.

In 2018, the Library also introduced the Alma platform, becoming the third institution in the world to use it alongside Summon.

The Library's facilities and services are for Luiss Community only. Other options are reserved to Research fellows, Library Members, External Users.
info

The membership is reserved to users who are no longer students or faculty members of the University, and is available for a registration fee.
FAQ

Can I access the Library after finishing my studies?

Can I access the Library if I don't attend Luiss?